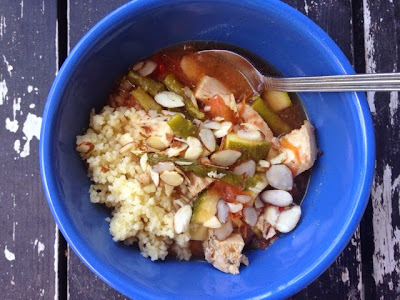 That was my youngest daughter’s reaction when she looked at the contents of the slightly modified bowl I presented her this past weekend. (I’ll tell you why the modification in a sec.)

Now to her, “fancy” is a good adjective. With the elder girl, not so much. I was quite pleased how this recipe turned out, mostly because it was just so darn easy!

Backstory (because you know there always is one!). A few months back I went to Panera Bread and had their Spanish Chicken Stew. Oh. My. WORD! (As Pam would say.) That stuff is delicious! It’s a combination of chicken, herbs, spices, vegetable, broth and there is some brown rice on the bottom. What made it unique and delightful for me was the sprinkling of sliced almonds on top. It did feel fancy!

Fast forward to this past weekend, when I wasn’t feeling that great and didn’t feel like standing over a stove to cook. I hadn’t tried out my new Ninja Kitchen cooking system (it’s like a crockpot plus four other things I’ve not figured out yet), and I had some almonds left over from another recipe I’d captured earlier in the week, so I decided to experiment.

Now if you’ve been following the blog for a while you know I am not a big fan of looking at other people’s recipes before creating my own. I mean…where’s the fun in that? Rather I like throwing stuff together and seeing how it comes out. Risky? Yes. But good!

I call this “Something Chicken Stew” because I’m not sure it’s particularly Spanish, per se. It’s something. And that something would be good. And easy. And good!

It’s up to you what grain you use in this recipe, if at all. Here are a few options, if couscous is not your thing.

My point here is you have choices. Play with your food!

To serve: place a small amount of couscous/quinoa/rice/whatever in a bowl. Ladle some stew on top of it (for your portion, you get to choose how much broth, as I know some folks worry about taking in liquids and solids together). Top with sliced almonds and enjoy!

After these pictures were taken I got the inspiration to add sliced olives, which just made this all the more delicious. Now I modified this for my younger daughter because she eats a pescetarian diet (she eats seafood but no other type of animal protein), so I made another little pot of this stew with just the veggies and broth. Still wonderful and yummy!

Here are the outtake pictures of this dish.

Let’s have dinner together for Cinco de Mayo!

Is Breakfast a Bore?

Get Bariatric Foodie Straight To Your Inbox!

Subscribe to the Bariatric Foodie e-mail newsletter and get recipes, product reviews, and inspiration to live your best lifestyle ever!

Success! Now check your email to confirm your subscription.